Akshay Kumar got involved in a new relationship with Shilpa Shetty when he had an affair with Raveena Tandon. Also at the time of dating with Shilpa, Bollywood Khiladi ‘Akshay Kumar’ started to share his feelings with Twinkle Khanna. And at that time, Akshay Kumar an actor of ‘TOILET – a love story’ left Shilpa and got married with Twinkle Khanna, daughter of Rajesh Khanna. The news of Akshay’s wedding was hottest news in Bollywood industry at that time. However after many years, Raveena and Shilpa open their mouth on the same platform. Although both of them not mentioned any name but got angry with Akshay Kumar. 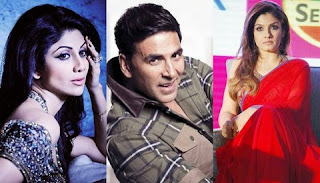 Govinda, Raveena and Shilpa Sheety have recently appeared in a channel reality show. Raveena was asked whether there is any mistake in her life? But taking away the reply of Raveena, Shilpa said, ‘Some mistakes are same for all.’ After listening to Shilpa’s response, Raveena responded with a counter.

She said, ‘there is some mistakes in everyone’s life. Shilpa and I both have made that same mistake. Right? You can understand what are we talking about?’ After listening to the reply of Shilpa and Raveena, the buzz of Bollywood began.

In the 9th century, when Bollywood industry is crazy with the news of love story of Akshay, Raveena and Shilpa then Akshay suddenly got married with Twinkle and left all his lovers. However, the actor of ‘Rustom’ Akshay Kumar repeatedly claimed that Twinkle Khanna is his old friend.