Sonam Kapoor is in another look at the Cannes Film festival. 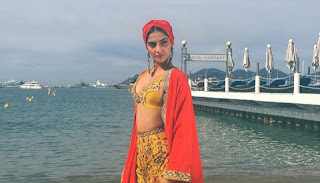 It is known to all of us that Sonam Kapoor’s fashion statement is very popular among Bollywood actresses. Although the actress could not able to win the heart of audiences through her acting skill but she won the mind of viewers through her fashion. Recently, Sonam Kapoor has also joined the Cannes Film festival with Deepika Padukone and Aishwarya Rai Bachchan. And Anil Kapoor’s daughter Sonam Kapoor infatuated the red carpet with her great selection of all fashion style there.

Recently Sonam Kapoor’s sister Riya Kapoor has posted some pictures of Sonam at Cannes Film festival in Instagram. And Sonam has been caught in the new look.