February 09, 2017
Suhana acts in the role of 'Cinderella'.
What is her father Shahrukh Khan’s reaction?

Acting is in her blood. So I think it is not something very new that the viewers can see her as an actress. But her father Shahrukh Khan does not want that his daughter will start acting so soon. Rather he told his daughter to focus on her career. Yet Suhana came in acting. However, she did not come in Bollywood big screen but viewers saw her on stage. 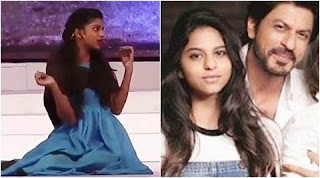 Suhana is an active member of a theater group in Mumbai. Recently the team was made the stage presentation of ‘Cinderella’ where Suhana has played the lead role. Several videos of the Play were shared on social media. According to a large percentage of B-town on seeing the video, Suhana knew very well how to create viewers attention. And why is it not? She grew up in the glamour world from her childhood.

And what is about acting? Yes, it's praise. After all, the name of the man is Shahrukh Khan who is grooming Suhana. However, King Khan does not open his mouth about the acting of her daughter in public still now.