Salman Khan cannot live without sex for a month


Salman cannot live without sex for one month. Are you surprised by seeing the heading? The secret life of Bhaijaan are now open in public. And his brother Arbaaz Khan shared this secret. So Bhaijaan is the main topic of Bollywood discussion now. 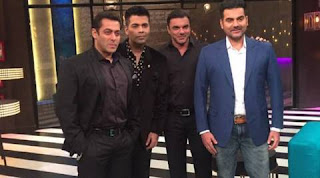 What is the real incident? Last Sunday, Khan brothers mean Salman Khan, Arbaaz Khan and Sohail Khan was the accumulation of 100th episode of ‘Coffee with Karan’ season 5. Arbaaz told the secret there. Arbaaz replied to the questions of Karan Johar on rapid fire round with Salman Khan, “Salman will not take the challenge to one month without sex.” Sallu Mia stunned for the reply of Arbaaz Khan and he tried to answer but it did not care anymore. Rather, a gossip started after the incident in B-town.

Salman Khan came on this show before. Then he told that he is virgin. Karan Johar again asked the question to Salman Khan in the Rapid fire round at this time. Salman Khan’s hastily replied for the answer, “Nothing has changed yet. I am still a virgin.” He said after a pause, “I am just like you Karan”. However, after the answer of Arbaaz Khan, Salman’s confession does not avail.