Rani's career was made by Twinkle


Twinkle makes explosive demand that she created Rani Mukherjee’s career. Rani Mukherjee makes her place in Bollywood with her acting skill. However, there is another actress behind the creation of another actress. But it is surprise to hear but the truth is that word. And the actress Twinkle Khanna was admitted to the on-screen camera. 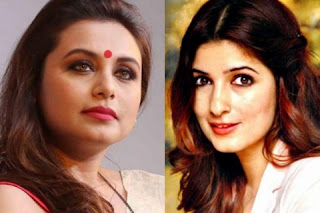 Recently, twinkle said in the TV show ‘Coffee with Karan’, “I have created Rani Mukherjee’s career.” But in what way? Twinkle said, “I could have hit one movie of my career but I have not agreed yet on offer. That movie is ‘Kuch Kuch Hota Hai’. Then tell me, does have I not make the career of Rani Mukherjee? The Indian visitors recognize Rani Mukherjee through that movie.

Twinkle Khanna is famous in B-town for her sense of humour. After talking these words, Karan Johar explained, “Twinkle wants to think about three days after I read the script of ‘Kuch Kuch Hota Hai’. After three days, Twinkle replied him where Shahrukh and Kajol will acting in that movie, who is there to see my performance. I will not do it. I got really sorry because I want Twinkle for that movie.”

After that, the actress said with smiling, “I was very bad actress. Everyone remembers me for my bad performance in the movie ‘Mela’.”