Why Vidya was angry on hearing ‘Female Aamir Khan’? Vidya Balan will back in the big screen again. There is suspense drama like ‘Kahaani 2’ in her hand. But on enraging suddenly Vidya Balan came on the news headline. 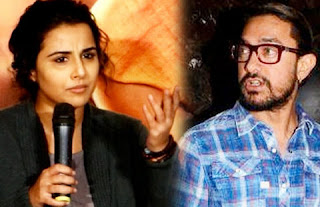 What is the reason for anger of the actress? In fact, she was called ‘Female Aamir Khan’. In response, Vidya said with mixing pun, “When my movie do business like Aamir khan’s movie then you should compare. Sadly, it is not happened so. In fact, Aamir Khan is working so many years in the industry…..”

‘Kahaani’ was released in the year 2012. Since then its sequel countdown had begun. A few months ago, the excitement was created during the shooting in Kolkata. However, Parambrata does not perform in the role of police at this time but Toto Roychowdhury can be seen. In addition, Arjun Ramphal and Jugal Hansraj performs in the role of special character in the movie. The film will be released in the next December 2.