September 13, 2016
“I am a Yogini, all allegations against me regarding drug trafficking are false.”


Drug trafficking about two thousand crore (Billion dollars) rupees is accused against her. She denies all the charges and false allegations against her as well as she said that she is an innocent Yogini now. And she is Mamata Kulkarni. 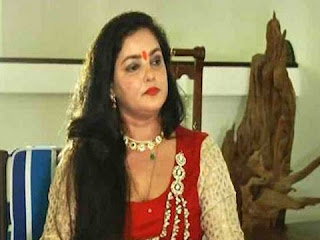 Recently, a video message from Mombasa, Kenya she said, “I am an innocent Yogini. I am involved with religious activities over the past twenty years. All the allegations against me are all false.”

Mamta Kulkarni wrote a letter to External Affairs Minister Sushma Swaraj and Union Home Minister Kiran Rijiju with indictment for taking action against Maharashtra Police who were arrest her for false drug cases. She also wrote in the letter, “I did not insult the Indian Act anytime. I did not do anything which is the shame for my country India. For the drug case, I am a victim of the US drug enforcement administration and I always harassed by the conspiracy of the US Police there.”

Mamta Kulkarni’s name came up after the durg seizure of two billion dollar (Two thousand crore rupees) by the Thane Police on June 18 last year. Because Mamta Kulkarni’s husband Vicky Goswami, as well as one of the main accused in this case. Hence the name of Mamta Kulkarni is locked in this drug case. For this drug case, Thane police approached to the CBI and the Red Corner Notice issued against Mamta and Vickie. Since then, she denies all the charges and false allegations against her in different ways.