She does not appeared more on the screen now. But she is still part of the curiosity and the mercury of inquisitiveness is not less till now. Her romance with Amitabh Bachchan, multiple marriages, her passionate character and with all makes a curiosity zone in the viewers mind. 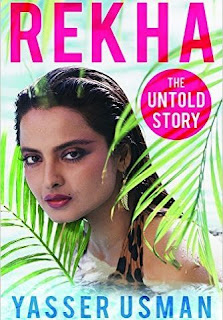 The unknown story of the long voyaged from simple girl Vhanurekha Ganesan to become hot passionate actress Rekha has sparked the curiosity. Her personal life biography, which was always behind the curtain, was make up space of stories and rumors. However, unbridled stories will be end soon. Android app has been published in a recent book with the life stories of Rekha – ‘Rekha: The Untold Story’.

The writer is Yasser Usman. The author claims, the readers will find the detail of the personal life of Rekha first time. The passionate young girl, suicide, romance and marriage all these words came up in that book. And there are many startling claims also. For example, about the first kiss of Rekha at the age of 15 years.

Despite objections from Rekha, her co-star Biswajit kissed her about five minutes during the shooting of the movie “Anjana Safar”. That there is such a scene in the film and she did not know it. After the release of the movie Silsila, Jaya Bachchan strongly prohibited Amitabh Bachchan to work with Rekha and that stories also included in that book.