Vidya Balan feels herself as a greedy actress

September 05, 2015
Describing herself as a 'greedy actress', Vidya Balan today said she is glad that she
grabbed roles in 'The Dirty Picture' and 'Kahaani', the two movies she feels fuelled a spate of successful women-centric films in Bollywood.

"Yes, I am a greedy actress...So, I just jumped into these great opportunities and those films ('Dirty Picture' and 'Kahaani') did in a way paved the way for the success of those films (heroine-led movies that followed)," she said. 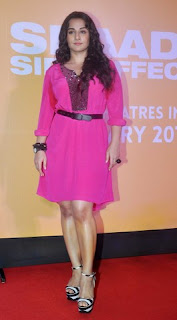 Vidya was addressing reporters on the sidelines of an event, organised by FICCI Ladies Organisation on revival of handlooms.

"I love to take credit for it (that women-centric movies are also making money now)...I am extremely humbled when anyone says that. But the truth is that I think cinema reflects reality and the reality around us is that more and more women are leading lives on their own terms," she said.

The actress feels that the audience also want to see that such movies are doing well.

"That is finding representation on screen making for more well-rounded characters..not just black or white...not characters you just glorify or vilify. They are more people; they are more human. So, I think audiences also want to see that... these films are doing well," the actress said.

Vidya made no secret of her love for saris, particularly handloom.

"I just love hand-woven fabrics whether it is saris or garments in every other form. I have grown up in handlooms and watching my mom, my aunts, my neighbours wear cotton saris, I think that's where my love for both saris and handloom comes from," she said.


Vidya said she loved wearing handloom. "I have seen my mom wearing cotton saris all her life.

I love wearing them (handloom) and I think everyone in the country should only be wearing them. It's not just heritage...it's very cool...you can do a lot with it," she said.

The actress said people across the globe are waking up to charm and elegance of handloom.

Asked if she is interested in acting in Telugu films, Vidya replied, "I am waiting for a good offer. Would be more than happy to do it (act in Telugu movies)."