It was not a statutory requirement, but in the end there is the usual sermon that those who live by the sword (in this case the Sandalwood rowdy's preferred weapon longu) die by it. Until that point the film is an inglorious glorification of rowdyism supported by misogynist characters and cheap comedy. Overall RX Suri is a slap on sensibilities. The film is a throwback to the kind of films a hordeof realtors-turned-producers churned out a few years ago. 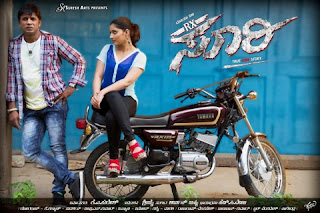 The audience are told why the protagonist became a rowdy halfway through the blood-splashed saga. But the changeover between the present and the flashback is so poorly conceived that the story makes little sense. The first hour is about a rowdy who is trying to lead a reformed life. The problem is a beautiful girl is stalking him and other gangsters out to kill him. At the interval, there is a failed attempt to show that our protagonist is dead. It is a poor attempt at suspense. From there the film goes on to become more of an advertisement for tomato ketchup. Most of the characters in the film get killed and are sprayed with thick red ketchup. The Censor has spoilt the viewing experience somewhat by forcing the film maker to pixelate the ketchup in many scenes.

Apart from the rowdy's love story and murder spree the film also has some tasteless comedy scenes. As if to compensate for the bad jokes, the main antagonist's (Ravishankar) character is made to be a buffoon for sometime.

Duniya Vijay outdoes himself in action scenes but apart from that has nothing much to do. When not killing someone, his character is shown smoking or warning the heroine. Akankshaa's charming presence is the only redeeming factor. Probably the only realistic character is that of Shobraj who does a neat job in his brief appearence. Rajeev is another actor who has some presence in whatever that is the story. Shrijai's debut as a director is a confused narration. It is an attempt aimed at the lowest common denominator; the so-called 'mass audience'. But film makers most often underestimate the audience.