Malaika as a judge on Jhalak Dikhhla Jaa Reloaded

September 03, 2015
Actress-producer Malaika Arora Khan, who will be seen as a judge on "Jhalak Dikhhla Jaa
Reloaded" as a replacement of filmmaker Karan Johar, is said to have made a grand entry on the first day of her shooting on the dance reality show. 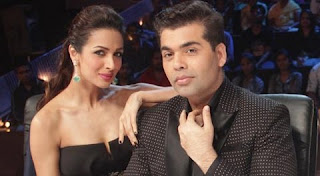 Malaika got a surprise phone call from Karan and was stunned with the warm welcome from the other judges and contestants on the show.

"Malaika's entrance was grand as always. She entered sitting inside a big heart to the song 'Munni badnaam hui'. The contestants and judges were really happy to see her. She also said that she is looking for the 'wow' factor in the performances," said a source from the set.

"What she didn't expect was a big surprise on her very first day. Shahid called Malaika on the stage for 'Jhalak Connect' - where she was connected to a fan Shambhu. When the caller started praising her too much, then she realised there is something wrong and later it was clarified that the caller was Karan,` the source added.

The episode featuring Malaika will be aired on Saturday on Colors.