​Kendasampige is a masterful surprise by director Suri. Setting aside the question of whether he thrives only when he handles newcomers, this film will stand notches above his Duniya and Inti Ninna Preetiya. The rough edges of his other films like Junglee and Jackie have vanished and here is a film that is near-perfect. 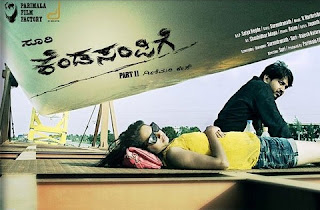 In retrospect, the commercial theme of the film can be singled out as the rich-girl-meets-poor-boy plot. But do not get deceived by it. Kendasampige is a romantic story, entwined in a road journey that is wrapped in a thriller. The film blends commercial elements with art and the demands of 'mass' and expectations of the connoisseurs are fulfilled.

Do not miss the first few minutes of the film. Else Suri's promise of the first part of this film in 2016 cannot be understood. The tagline of this film is Ginimari Story Part II. Glimpses of the first part; Kaage Bangara, is seen throughout this film. The young lovers in Kendasampige do not know what hit them and they are on the run. As they rob their way from Bengaluru to Belagavi they realise it is not just their love at stake but their lives.


Suri excels in giving the film a realistic touch. The lead pair are newcomers and it makes you wonder if Suri wrote the story with their personalities in mind. Commercial cinema usually shows all characters in hyper mode. Here each actor speaks and behaves like their character's stature needs them to be. A better cast than Chandrika and Prakash Belawadi for the roles they portray may not have been found. But it is Rajesh Nataranga who really steals the show with his impressive presence.


Satya Hegde is another star in the film. Though the use of drones may seem excessive, it shows places like the Chitradurga Fort, Hubballi, Belagavi and other places in all their grandeur. Suri's films always had great music.


Kendasampige once again brings composer V Harikrishna and lyricists Jayant Kaikini and Yograj Bhat together. And there is no need to add that there is magic in the air. There are very few films that give a wholesome experience.


Just like the flower, Kendasampige's fragrance remains long after watching it. Do not miss this film for anything.