Amyra Dastur actress of Ticket To Bollywood back from London

September 07, 2015
Amyra Dastur, who returned from London on August 25, with gold streaked, brown locks,
admits that it's been a wild, month-long schedule for her musical-drama, 'Ticket To Bollywood'. 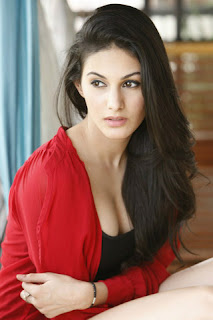 "We shot a club track, 'Bewdi...', with a dozen girls in shorts and crop tops, dancing on an open bus, which whizzed by Piccadilly Circus, Big Ben and London Eye," laughs Amyra, who plays a rich brat with filmy ambitions, in the film. Amyra's initial inhibitions were swept aside after the makers con vinced her to listen to three songs from the film. "They bowled me over.I've been practising my moves for two solo dance tracks, for six hours a day, over the last two months. We will be filming them in Delhi," she informs.

Dilip Tahil plays her over-protective dad while Vinay Pathak is a film director. "Vinay made me laugh so hard before one scene once, that I was in tears. My entire make-up had to be redone," she recalls.

The 22-year-old-star was last seen in the Tamil film, 'Anegan', opposite Dhanush and Karthik and the Bollywood fantasy, 'Mr X', with Emraan Hashmi. "Now, I want to explore meaningful, Indie cinema and art films. I'd love to tour the festival circuit with them," she smiles.