Welcome Back will release soon

August 31, 2015
The Bhais have returned with Welcome Back,producer Firoz A Nadiadwala latest
installment of the hit franchise,Welcome(2007). This time around, Majnu Bhai (Anil Kapoor) and Uday Bhai (Nana Patekar) - two of the most adorable characters on screen - are joined by Ajju Bhai (John Abraham) to entertain the audience.As the Anees Bazmee-directed movie nears its date with the theatres, the three stars recall the wonderful time they had during the shoot and tell us what makes this the funniest venture for the entire family to enjoy this season. 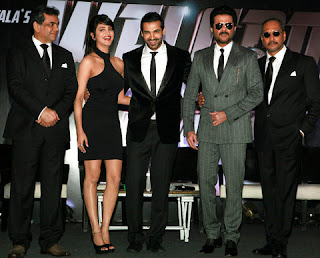 Says Nana, "When I read the script, I felt I needed to do this film to unwind. It gave me the chance to open up and laugh out loud. It's written well and funny elements have been added at the right time, with the right cast delivering those dialogues and punches."

Recalling how they enjoyed the movie even more when they watched it,Anil adds, "Nana is a very straightforward person and never sugar-coats things.But the fact that he's so excited about the film and promoting it so extensively says a lot about its potential."

Pleased with his experience of working with the 'original Bhais', John concedes, "A lot of people told me that in this film there must be a lot of pressure on me with stalwarts like Anil and Nana, not to forget thatWelcomewas a big hit. But on the contrary, I was very relaxed and having them along with the rest of the ensemble cast made me feel completely at ease." He sums it up saying, "What I enjoyed even more was the fact that this film allowed me to do two things I love - comedy and action." The film also features Shruti Haasan, Paresh Rawal, Naseeruddin Shah, Dimple Kapadia, Shiney Ahuja and Ankita Srivastava.