A new lead actor makes his debut and Aru sure has taken efforts to make an impact. It is an unusual love triangle. The freshness in the story is marred by a slow paced narrative and the intrusion of some cliched incidents, fights and dialogues. Not that there isn't any thing new. Some of the dialogues and incidents in the film are refreshing but there seems to be a confusion between keeping to traditional commercial formula and completely breaking away from it. The film is also the launchpad for Rachita Ram's sister Nithya Ram. Aru, Aishwarya and Nithya do a good job when it comes to dancing in the songs and the newcomers show they can emote as well. 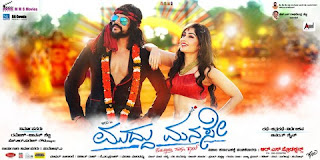 Suresh (Aru) has the wrong girl falling in love with him in his village. The poor son of a vegetable seller has no chance. In another time line Suresh has another girl falling in love with him and again his status is the barrier. Does he manage to get either girl is the story. But there are many things that are beyond his control plotting against him. Muddu Manase had all the potential to be a good romantic film. The songs have good tunes with beautiful lyrics. The locations are pleasing and the acting is decent. The poor mother's struggles, the unwanted fights to portray the new actor's heroism and some crudely constructed incidents hold back the film.

Aru can be a capable commercial actor. The acting could however improve a lot. Nithya Ram is almost a look-alike of Rachita and is likely to have a long career in the industry. Aishwarya Nag, for long in the sidelines gets to play a tomboy character which she pulls off easily. The film may not be the first choice for the weekend but is not really bad either.