August 29, 2015
Imran Khan, who is making a comeback to the silver screen after almost two years with
Nikhil Advani's "Katti Batti", says shooting the "Lip to lip" song with Kangana Ranaut for the movie, left him "exhausted" and describes it as the "most physically demanding thing" he's ever done.

Released on Friday, "Lip to lip", which is the third song in the film after "Sarfira" and "Sau aasoon", is touted to be the first song in India where stop motion technology has been used. Kangana and Imran are said to have kissed each other for a collective 24 hours over a period of three days in order to get the right frame for the song. 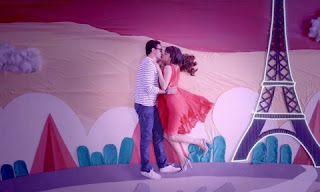 Explaining the use of special technology in the song, Imran told IANS: "We have shot 'Lip to lip' using stop motion animation, which is very time intensive because you have to get it right per pose, and they (filmmakers) will take one single frame. When you move a little bit then another frame and it goes on. After they animate it, it looks like smooth motion.

"But it means that you have to hold that position and suppose if there is a phone or a light coming in, then it will happen frame by frame. So all of the kissing moments in this song, we had to start to kiss and they had to take frames one after another as a hundred things would move around us."

Though it is not the first time Imran is going to be seen kissing his co-star on screen, he considers "Lip to lip" as "physically demanding".

"It was very exhausting. It looks gorgeous, but it's one of the most physically demanding thing that I have ever done because holding the body in that position static through the day and not moving at all. At the end of every day, we felt like our back was about to break," he added.

Talking about the film, Imran said "Katti Batti" is not based on live-in relationships.

"It's just incidental in the story. They (the characters) were living in together but it was actually before the film even begins. This boy and girl first meet in college. They start to date and fall in love and start to live together. They actually live together for five years and in those five years, you see the difficulty of their relationship as they start fighting and ultimately they break up.

"All of this happens even before the film starts. So when the film begins, with all of this having happened in the past, what happens next is actually what 'Katti Batti' is about," Imran said.

The film is slated to release on September 18.