Kabir and Katrina score a Hattrick

August 29, 2015
Kabir Khan and Katrina Kaif , who have previously given hits like New York and Ek Tha
Tiger, are back with their third venture, Phantom, produced by Sajid Nadiadwala and Siddharth Roy Kapur.

Phantom has been in news for its four villains who have piqued the curiosity of the audience because of the headlines they have made in the last few years. 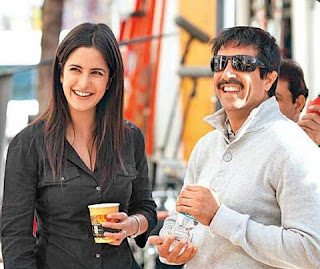 Kabir and Katrina who have associated for the third time, share a comfort level. They are in perfect tandem with each other and it is due to their mutual trust that Katrina agreed to do daredevil stunts and even went de-glam for her role.

As a director, Kabir has earned the reputation, and rightfully so, of pushing the envelope with every consecutive film.

Phantom, which is based on the aftermath of the 2611 terror attacks that left Mumbai bleeding, is controversial and sensitive.

This time around, Kabir and Katrina have put their heads together to ensure that their third labour of love is something that their audiences will savour.

Kabir says, "Katrina and I have had a great association since New York and ETT. She has an impactful role in Phantom. Both of us have our fingers crossed, that we score a hat-trick."

Katrina says, "I'm really happy and proud of Kabir's success. I think it couldn't have happened to a nicer, more deserving person. He is one of the most exciting new voices we have in cinema today. Apart from being one of the main inspirations of my career, he also remains one of my truest friends. He is a person the unit loves. New York was one of my most special films and Ek Tha Tiger was one of my biggest hits. Even though we are yet to know the audiences' verdict on Phantom, it will always be a film I'll be extremely proud of. So far, Kabir and I have had a wonderful journey together.I thank him for his confidence, trust and support. I hope our journey continues in the future in an even more beautiful way ."

The final product has left those who have seen this film in previews, absolutely delighted.