A purely fiction fantasy, "Bangistan" is a flimsy, sardonic film which may have been crafted with good intentions, but is poorly executed.

Set in a make-believe land called Bangistan, it is the story of two fundamentalists, Hafeez-bin Ali (Riteish Deshmukh) and Praveen Chaturvedi (Pulkit Samrat), on a mission in Poland. The film encompasses their journey from being terrorists to peace-loving missionaries. 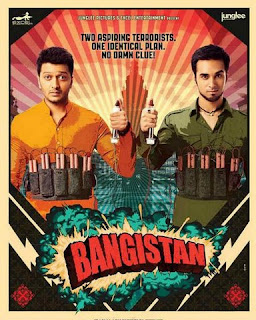 Initially, the contrast between the two, Hafiz and Praveen, and how they are initiated into their respective missions, is what keeps you hooked. But as the tale progresses, the transition from a comedy to a film with serious messages seems incongruous and the film loses its appeal.

Packed with amusing, satirical reference points and silly antics by the characters in the beginning, the film shifts gears as it slowly degenerates into a social, preachy drama which is cliched and tedious to watch. Some of the dialogues in the latter half, are reminiscent of scenes from Amir Khan's "PK", Akshay Kumar's "OMG: Oh My God!" and other recently released films that spread the message of non-violence and tolerance to all religions.

The writing lacks depth. The issues are generically tackled, the characters are all poorly etched and the subject content, except for names like FcDonalds, Al-Kaam Tamaam, Maa-Ka-Dal, offers nothing new by way of humour, making it seem boring and trite. 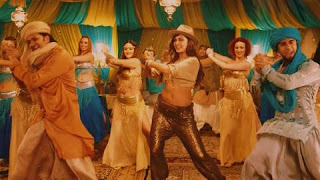 With the focus mainly on the two protagonists, the other characters are relegated to two-dimensional flat characters.

Riteish Deshmukh is a good actor and he makes a sincere effort as always, to bring gravitas to his character. On the other hand, Pulkit Samrat with his excessive histrionics, tends to emulate Salman Khan. Together, they do make a formidable pair, but are not strong enough to hold the entire film squarely on their shoulders.

Only with a few scenes, Jacqueline Fernandez is obviously wasted as a bar hostess Rosie. With nothing much to offer, her character is easily dispensable. Chandan Roy Sanyal as Tamim, the taxi driver in Poland tries his hand at some over-the-top acting and is least amusing. 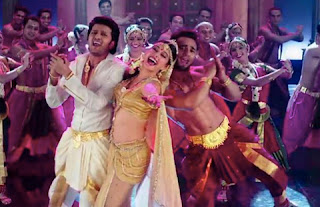 Visually too, the camera work is limited and unexciting. The computer-generated graphics seem elementary and unattractive.

In his directorial debut, Karan Anshuman disappoints as he fails to wield the baton effectively to elevate a poorly written script, of which he too is a part.

Overall, the film is mediocre fare. You can safely avoid a journey to "Bangistan" unless you are a Riteish fan.