July 24, 2015
Acclaimed Indian film director Mani Ratnam, known for his films like Roja, Bombay and Dil
Se, has won the Icon award at the Bagri Foundation London Film Festival for his outstanding contribution to cinema. Receiving the award at the closing night of the festival in London on Thursday night, Ratnam said, "I am honoured and humbled to receive this icon award. I think Indian cinema is at the threshold of a new era, and the Bagri Foundation London Indian Film Festival is a showcase of this next generation. I am sure that future awards will be won by some of the bright young talent that is coming up." 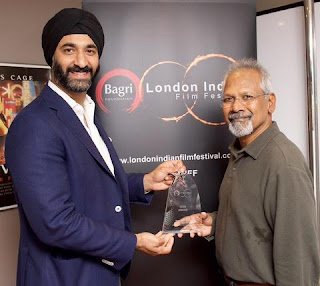 Ratnam also gave a rare Screen Talk masterclass at the BFI Southbank, with Peter Webber (Girl With a Pearl Earring), was part of the festival. Bollywood actress Manisha Koirala won the Spirit of Inspiration award from Sun Mark Ltd for her outstanding work in supporting the earthquake appeal in Nepal.

"We admire Manisha's work in cinema where she was known for taking on difficult roles and her support for social causes and for those who have no voice and whose message needs to be spread," the Foundation said. Delhi-born actor Suraj Sharma, whose lead role in film Umrika helmed the festival, was the recipient of the festival's Outstanding Young Talent award. "The festival has been so kind, awarding me it's first outstanding young actor award and opening the festival with our film Umrika'! The response for our film has been better than we could ever imagine. My gratitude goes out to the festival for doing such a great job!" said Sharma.