Based on a true story, `Million Dollar Arm` is a predictable motivating sport film from the Disney stable, made not from the heart, but with economics at its core. Its intention seems to entice and convert youngsters, who have never played the national sport of the United States before. Wonder if they will succeed in striking the right chord. 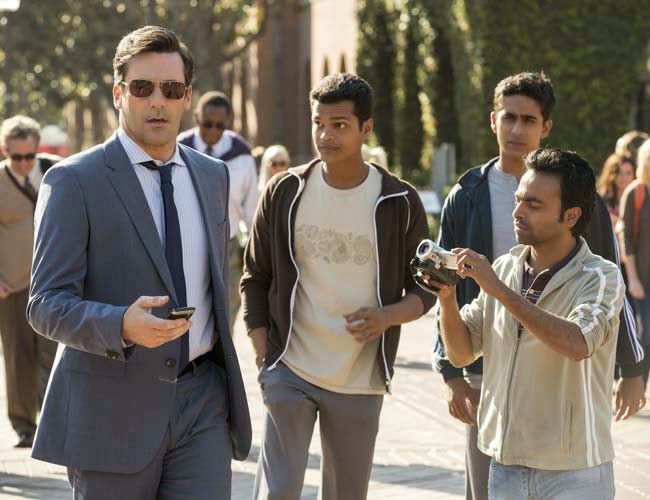 Having said that, there is something seriously brewing within the baseball community in America. The Americans seem to be going all out of their way to promote their national sport, considering that hardly anyone in India plays baseball.


Films promoting the sport are hitting the marquee. But these films definitely do not seem to rise from randomness.


The film charts the journey of an opportunistic sport agent JB Bernstein's desperate attempt to revive his sinking enterprise, which he operates along with his partner, Ash Vasudevan.


After failing to sign a prominent sports personality they've been courting for over a year, JB hits upon an idea to create a reality contest that will take place in India. They reach out to cricket players and see if they can find a few players who they could groom to become baseball players. This they do with the hope that they would end up with an in-house star.


Easier said than done. Bernstein travels all over India with the help of a keen enthusiastic assistant, Amit, who offers his service "for free` and a retired baseball scout Ray Poitevint, played in classic killjoy fashion by Alan Arkin whose finely tuned ears tell him all he needs to know.


Their labour of love comes to an end when they identify two promising prospects - Rinku Singh and Dinesh Kumar Patil.


What follow is trials and tribulations of the two youngsters who strive for a future. Their story is inter-laced with JB Bernstein's romance and evolution from a hard-core marketing professional to a humane promoter.


Jon Hamm with his perfectly groomed stubble and cocky grin plays the arrogant Bernstein with ease. In fact, it is his romantic pairing with Lake Bell as Brenda the no-nonsense doctor-cum-neighbour that brings out the best in him.


Suraj Sharma, the star of `Life of Pi`, as Rinku Singh and Madhur Mittal, who played the wayward older brother in `Slumdog Millionaire`, as Dinesh Kumar Patil are endearing.


So is Pitobash as Amit. In fact, he tries to ape Irrfan in his style, which is so notable in the pep talk scene, when he goes over the top rolling his eyes and gesticulating dramatically.


Darshan Jariwala as the agent in Mumbai is wasted.


Similarly, Tom McCarthy's script does not do justice to Aasif Mandvi, who plays Ash Vasudevan and Tzi Ma as the rich investor Mr. Chang.


The background score is typical of A.R. Rahman. In fact, the 'aalap' prior to the crescendo music during the climax is a perfect set piece that injects the adrenaline boost. In the otherwise soothing background score, the final piece in Tamil seems to be a hurriedly done short-cut job, which is pretty jarring to the ear.


Visually, Director Craig Gillespie looks at India through the Hollywood prism, representing it as an uncanny bizarre country packed with weird living conditions with locals who unwittingly admit that "Here in India, we do things a little differently", making it look like a poor country cousin of `Slumdog Millionaire`.