Before going ahead with the critical analysis of recently released "Hawaa Hawaai" I would like to specifically mention the poetic verse of one of the legendary poets who stated that "Manzil Unhi Ko Milti Hai, Jinke Sapno Mein Jaan Hoti Hai; Pankh Se Kuchh Nahin Hota Dost, Hauslon Se Udaan Hoti Hai". And I started with these lines, because so is the spirit of this, Amol Gupte cine delight which is undoubtedly a lovable slice-of-life. In the era, where majority of cinematician of Bollywood are tossing their destinies with some mega budget or larger than life projects, Amole once again tried his cinematic prowess with what he is is best at i.e. dealing with the kids cine chronicle. 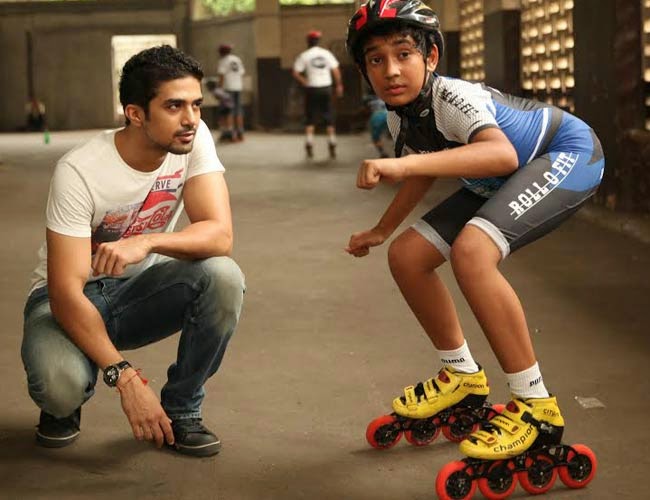 By now it's an established fact in Indian cine Industry that whenever our B-towner's have tried to bank up on the flavor of ambitiousness and aspirations they have always succeeded in fetching desirable outcomes for themselves. Be it about "Iqbal", "Taare Zameen Par" or the recently released "Hawaa Hawaai" results have always been quite pleasing for viewers and favorable from critics point of view too. 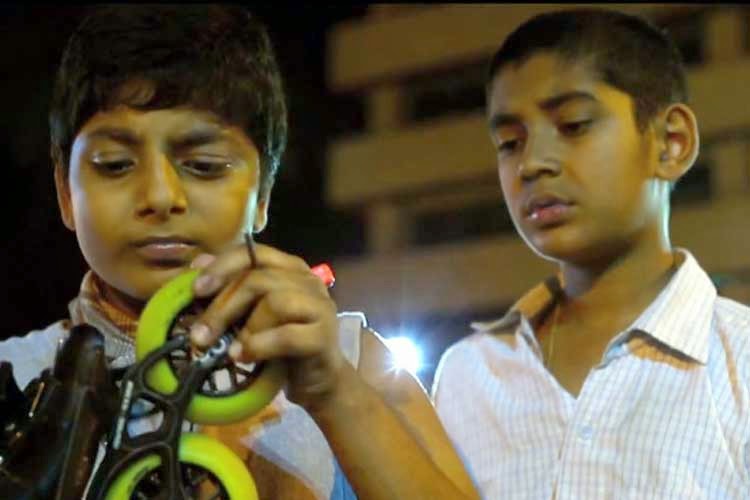 "Hawaa Hawaai" primarily narrates the story of a bunch of underdogs, who know the art of smiling despite being a prey of adversities which we seldom notice in our real life.

Anyhow coming to the premise of, "Hawaa Hawaai", the plot of the movie narrates the story of a kid, Arjun Harishchandra Waagmaare (Partho Gupte), who migrates from the Yavatmal region of Maharashtra to Mumbai, after demise of his debt ridden father, Harishchandra Waghmaare (Makrand Deshpande) to city of dreams Mumbai. And in order to make both ends meet and to shoulder his familial responsibilities, he takes up a job at a tea stall located right next to skating rink. There one fine evening he has a rendezvous with, Lucky (Saqib Saleem) a skating coach for whom training young kids in the sport is more than a passion. With frames rolling ahead Arjun develops a fascination for sport and starts dreaming about making it big in the game. So what follows next does Arjun succeeds in fulfilling his dreams or just continue with his calamitous way of living. To know watch this sheer heart touching slice of life, "Hawaa Hawaai. 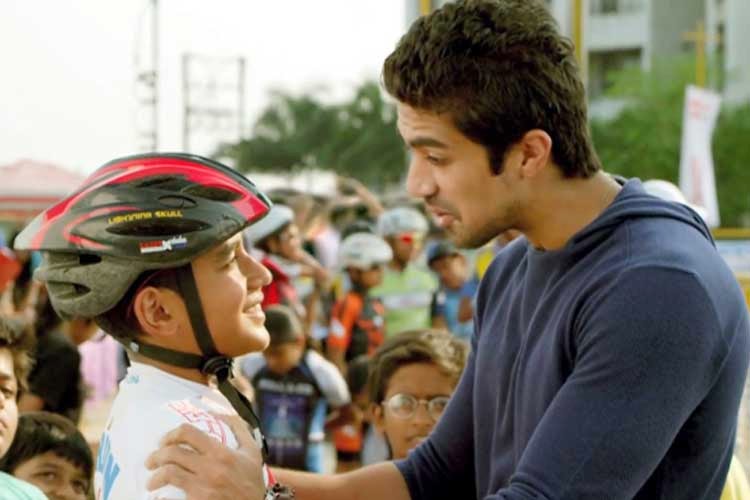 Well as far as story of "Hawaa Hawai" is concerned then certainly it doesn't have any thing of "never-seen-before" kind in the offering, and that's because it's not for the first time that we have seen young underdogs with endless aspirations and ability to make adversities fall in their favor by their will power (take the example of Iqbal and even Slumdog Millionaire).

But one thing which is thoroughly praiseworthy about narration of "Hawaa Hawaai" is that it not only captures the aspirations and courage of young underdogs residing in the slums, but at the same time with utmost exception presents some other socially relevant issues like friendship, life of poverty ridden farmer and dichotomy in the lives of elite and poor children's life, and that too without bringing them at the center stage or diverting from the main story line. On one hand Amole has exceptionally portrayed the ambitiousness of young poverty ridden lads and on the other hand he has marvelously presented their unfazed attitude towards of these kids life. Narration of "Hawa Hawaai" certainly proceeds through the thick and thins of protagonist's life but it nowhere get wrapped around the same in totality. So in nutshell kudos for Amole for knitting so many heart-warming ideas in one tale and that to without allowing anyone of them (except the idea in the center) to divert the viewer's attention. 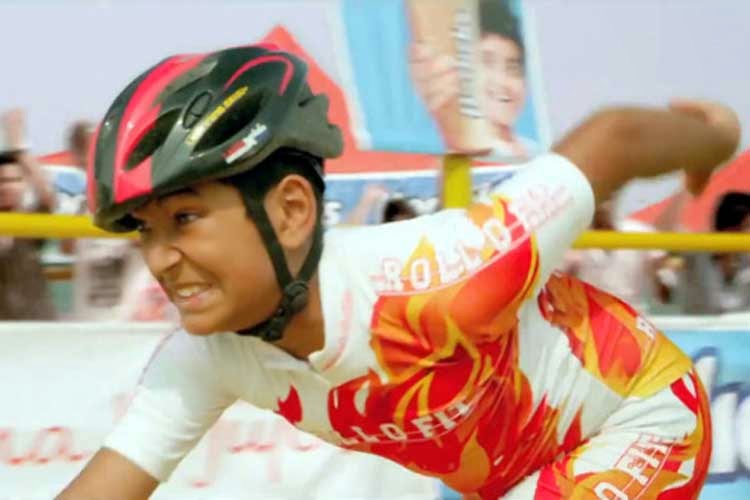 After seeing Amole excelling in his previous cine stints like "Taare Zameen Par", Stanley Ka Dabba, there remains no doubt about the cinematic excellence of his and his habit of keeping an eye on even the pettiest detail of his cine-design. And even with "Hawa Hawaai" the guy has maintained his legacy of doing so. Right at the onset, movie captivates all your neurotransmitters and never gets derailed from the theme at the center. Although some of the sequences in the pre-interval part and a few in the second half may look like obtruded planks, but when in totality you have a soul satiating package in the offering, then these minor flaws are passable.

Production design of Amit Ray and Subrata Chakrborty and editing of Deepa Bhatia is exceptional. Besides it's the marvelous camerawork which further spruce up the extraordinary appeal of the movie.


Music of Hitesh Sonik and lyrics of Amole Gupte are very much in accordance with the spirit of the movie.


Coming to the performances, but before that it is pertinent to mention here that the movie totally belongs to the "Fabulous Five" young lads who by their performance make this ordinary premise look extra-ordinary. Partho Gupte who is the central character of the movie excels yet again. And by his astonishing acting skills literally hits the jackpot and thoroughly proves that he is "Ek Lava" when it comes to performing on the big screen. Although Saqib gets overshadowed by the gang of young lads initially, but subsequently he succeeds in making his presence feel in the post interval part with his somewhat sinewy performance.


Besides Partho it's his gang of boys comprising of Bhura (Salman Chhote Khan), Gochi (Ashfaque Khan), Abdul (Maaman Memon) and Bindaas Murugan (Tirupathi Krishnapelli) which too deserves a huge bunch of accolades, especially Ashfaque Khan (Gochi) who despite being on the edge of the stage manages to emerge as a stand out performer of a sort. 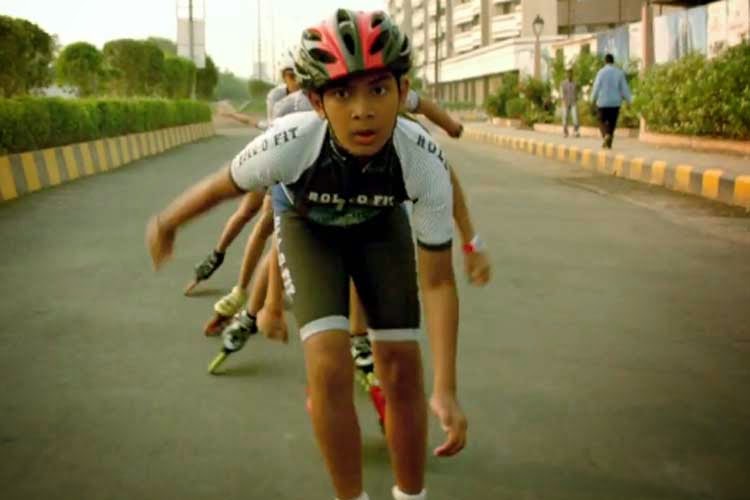 Neha Joshi (as Partho's mother) shines in her small yet significant role. Even rest of the cast Divya Jagdale, Sanjay Dadich, Makarand Deshpande and Razzak Khan too succeeds in leaving their mark and slips with ease under the skin of their respective characters and leaves an impact at the same time.

To sum up, undoubtedly "Hawaa Hawaai" doesn't have that redundant masala, nor it has on the edge of the seat kind of thrill, but certainly it is a mesmerizing and resplendent cine paragon which will surely flabbergast you by its brilliance. So I am going ahead with 3 stars out of five for this heart-touching and astounding cine chronicle.