Giftwrapped in an emotional father-son and family bonding story that hooks you on the sensitivity graph, "Godzilla" doesn't give anybody time to be endearing or sarcastic or human in any way. It is a conundrum of a techno-thriller and a fabled nightmare put together.


In the opening credits, director Gareth Edwards' "Godzilla" pays homage to the first 1954 released "Godzilla" film by re-establishing the fact that the monster is a product of the man-made nuclear disaster at Hiroshima.


What follows is: In 1999, in the Philippines, at the site of a mining disaster, Japanese scientist Serizawa (Ken Wantanabe) and his cohort Graham (Sally Hawkins) are among those who are baffled with the discovery of radiation in the gigantic fossils. 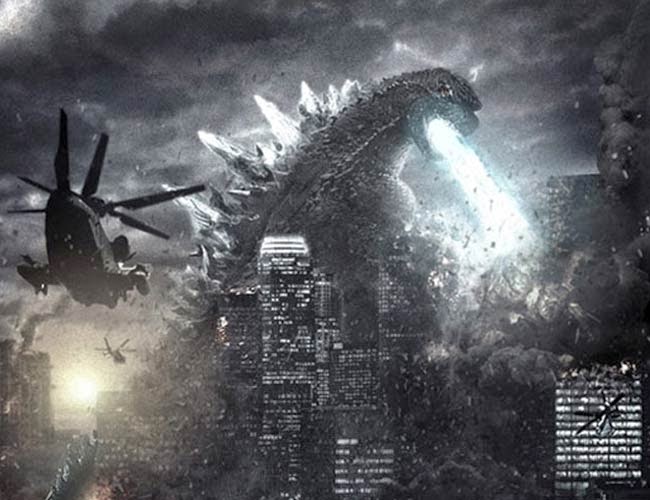 Simultaneously, on the Japanese coast of Janjira, American scientist Joe Brody (Bryan Cranston), who is working at the local nuclear power plant suspects that the increasingly strong tremors are officially blamed on earthquakes. He argues, "Earthquakes are random. These tremors have a pattern." But then it is too late as the entire facility is reduced to a wreckage and in this disaster, he loses his wife Sandra (Juliette Binoche).


Fifteen years later, Joe and Sandra's only child, Ford (Aaron Taylor-Johnson) has grown up to become a bomb diffusing expert for the US Navy. He is one day summoned to bail his father, who has stayed behind in Japan all these years. When Ford arrives to bring him back home, he realizes that his father has not left his past behind. He has holed himself in the tiny apartment, crammed with would-be evidence of a government cover-up of what really happened at Janjira.


To support his argument, Joe shows him that the quarantined place is another sham. "The radiation in this place ought to be lethal but there is nothing here. It's clean." And with guilt, he admits, "My wife died here, something here killed her." And at the same breath he warns that something is "going to send us back to the stone-age."


Soon that something is revealed as M.U.T.O. - short for a Massive Unidentified Terrestrial Organism, which resembles the sleek long-legged Praying Mantis who lives on a diet of radio-active energy.


Once this 300 foot creature makes an appearance, all hell breaks loose and the thrill begins, with not one but two of them to entertain us, with fire in their belly and strong desire to mate.


One moving from Janjira Japan and the other from Philippines, they travel past Honolulu, Las Vegas and all points in between heading towards the Yucca Mountain nuclear waste repository.


And to destroy them to "restore balance in nature", Godzilla too moves in the same direction and their paths merge at San Francisco Bay in California.


Despite the result being obvious and the logical explanation absurd, the emotional quotient between the human characters is engrossing.


The action sequences; when the monsters hop from one skyscraper to the next, crashing buildings and causing mayhem, don't live up to the mark. It is a bit of a letdown. Also, the fear element in the humans witnessing the monsters fighting each other seemed too synthetic and difficult to relate to.


Similarly, Ford's track to eliminate the monster was not only outrageous but also preposterous which is lost in the finale.


And finally, packed with technical brilliance and arresting visuals, the film leaves you yearning for the kaiju, Godzilla. After all he is the protagonist, the trump card, the main attraction of the film.