In the last one year, after "Zambezia" and "Free Birds", we once again have animated talking birds in "Rio 2". But unlike the previous two films, this one is a musical which meanders at its own pace with avian antics and foot-tapping music. 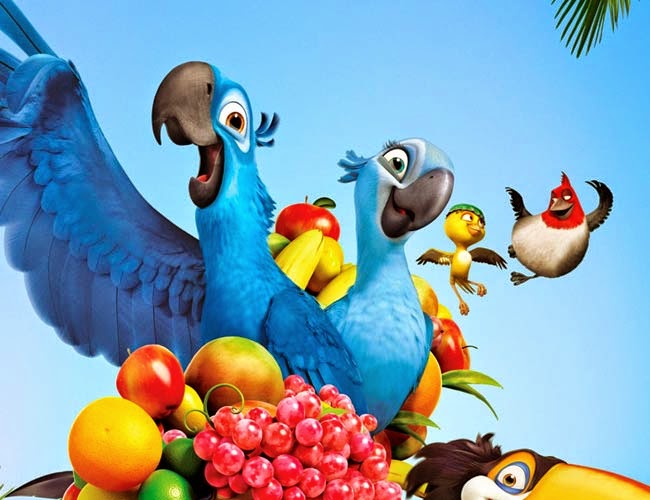 A sequel to its 2011 released franchise, with macaws, a cockatoo, a poisonous frog, a toucan, a pit-bull and more from the Amazon, "Rio 2" takes off from where it left in "Rio". This one is a comparatively mild fare.


The film opens with vibrant New Year's Eve celebrations in the music-filled iconic beach of Rio de Janeiro, with the crowd singing, "It's a crazy party" and punctuated by fireworks bursting above Christ the Redeemer statue.


Blu (Jesse Eisenberg), the rare macaw who is now well-settled with his mate Jewel (Anne Hathaway) and his brood of three young ones; the bookish little bird Bia (Amandla Stenberg), the mischievous Tiago (Pierce Gagnon) and aloof older teen Carla (Rachel Crow) are in the heart of the city.


With flipping pancakes and listening to iPods and not normal activities of wild blue macaws, they are content being city bred and bask in the knowledge of being the last of their rare species.


But a chance spotting on national TV suggests that on an expedition to the Amazon, Blu's ex-guardian, the ornithologist Tulio (Rodigo Santoro) and wife-cum-assistant Linda (Leslie Mann) discover the existence of a surviving group of the endangered blue macaws.


Jewel decides it's time for the family to get back to their roots. Blu has no say in the matter, except to oblige. Miles away from Rio in the depths of the Amazon rainforest, they encounter a flock of independent blue macaws led by Jewel's long lost dad, Eduardo (Andy Garcia), along with his sister Mimi (Rita Moreno) and the preening defender of the tribe, Roberto (Bruno Mars), Jewel's childhood playmate.


Here, Blu and his brood are nourished with lessons on family bonding, relationships and abandoning life's distractions like the tech-obsessed lifestyle for an ecologically sound quest about keeping life's most beautiful wonders safe from destructive industrialization.


Writers Carlos Kotkin, Jenny Bicks and Yoni Brenner have packed the script with more of character humour, than situational comedy. There are moments of inspired eccentricity which are repeatedly hilarious, particularly when instigated by the pompous cockatoo, Nigel (Jermaine Clement) is bent on revenge after his plot to kidnap Blu failed in the first edition.


Apart from the star-studded voices and detailed animation, it is the musical numbers that are the icing on the cake in "Rio 2". Especially, the absurdly re-jiggered version of Gloria Gaynor's "I Will Survive", sung by the poisonous pink frog Gabi. Rendered by Kristin Chenowet, it's definitely worth a mention.


Though the film is visually appealing and picturesque, the highlight of "Rio 2" is the beautifully choreographed soccer game in which Blu finds himself at the receiving end.


Coming from director Carlos Saldanha, who had previously delivered "Ice Age", "Rio 2" would definitely appeal to kids and adults alike.