Who isn't familiar with Tarzan, created by Edgar Rice Burroughs? The plot is inconsequential as it is the jungle boy's experience of living with the apes that is the crux of Tarzan's story.


This is how; director Reinhard Klooss introduces little JJ Greystoke, a boy from New York who survives a helicopter crash that leaves him orphaned in the African jungle.


Apparently, JJ's father John Greystoke, the CEO of Greystoke Energies, was exploring the jungles in search of the legendary meteorite that had crashed 70 million years ago. The meteorite is said to be the source of boundless energy. It is at the fag end of this expedition that the helicopter crashed due to some magnetic interference.


After the crash, Kala the silverback gorilla, who had lost her mate and baby the previous night, finds little JJ. She takes him under her tutelage and soon the entire tribe treats him as one of their own. 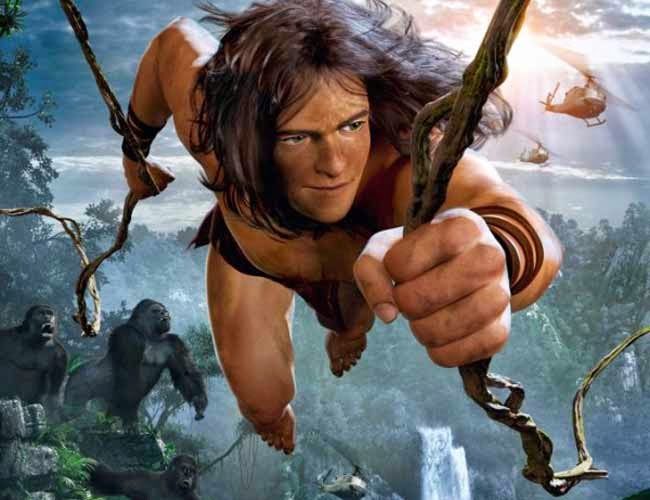 Years into the wilderness the little boy turns into a feral youth playing with fellow apes, swinging around the jungle with gay abandon.


Tarzan soon realises there is more to life, when one fine day he spots young Jane Porter who is in the jungle to visit her explorer father at the camp that was once the Greystoke compound.


After being chased by an ostrich-like bird and then bitten by a snake, Tarzan saves Jane but she barely remembers the incident.


But then destiny reunites the two of them when years later she returns as an hot determined to save the environment. This time she is accompanied by William Clayton who now runs Greystoke Energies and brings with him a mercenary army to locate and secure the meteorite.


In the meanwhile, romance brews between the two as they spend some adventurous moments in the jungle.


And they have an equal share of obstacles, which Tarzan naturally overcomes.


The voices lent by the star cast suits the characters to the perfect tone. Craig Gardner as the four-year-old JJ along with Anton Zetterholm who lends his voice as the teenage Tarzan, Kellan Lutz as the muscular hot Tarzan, Spencer Locke as Jane, Mark Deklin as John Greystoke, Jaime Ray Newman as Alice and Trevor St John as Clayton -- all do a very good job.


Though the Burroughs' series have always entertained readers, unfortunately this version is bland fare.


The script moves on an even keel with often seen plot points. The tale meanders without any aim or motivation. The story telling is synthetic and the several action sequences are ineffectual.


Also, the character progression of Tarzan from feral to the English speaking lad is so superficial and unbelievable that it takes away the charm from the character.


Visually too, the motion capture technology that is used for animating the film is a bit fuzzy in the 3D version. The lensing is an issue, there are certain frames where the creatures were blown out of proportion making them seem like monsters, especially the crabs and spiders. Also the tentacle monster in the mysterious terrain that Tarzan and Jane saunter into, seemed more like winding twigs than a frightening monster.