Although it's been ages since the era of bandits, dacoits or the Baagis (what they love to call themselves) has consummated in India, and specially the much dreaded Chambal region of north-northeast Madhya Pradesh. But the charm of stories associated with them has never lost its lustre among those who love to hearken the tales related with the regions and its uncrowned potentates of yesteryear. So is the case with our Industrivalas, who are no exceptions to the fact, and have time and time again tried to come up with a cine cantata, either inspired from the life of some of the dreaded names of the region or at least with its roots embedded in the region. 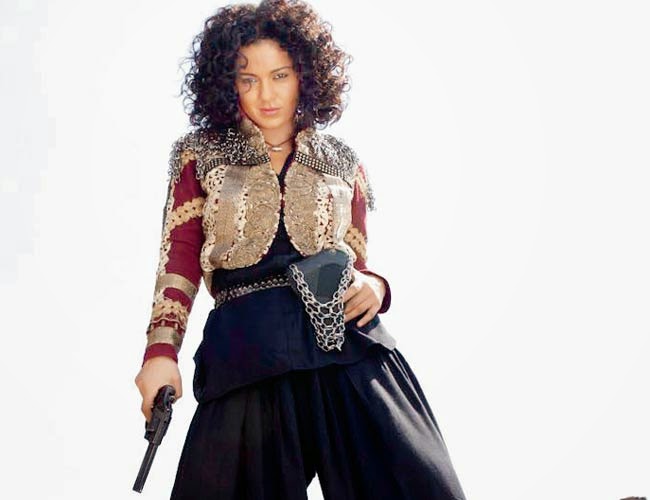 And from the recent generation of Indian movie making, "Bandit Queen" (based on the life of late Phoolan Devi) and Tigmanshu Dhulia's "Paan Singh Tomar" are some of the conspicuous examples of the same. But hitherto we have witnessed our Bollywooders fiddling with biopic, but this time its director and story writer, Sai Kabir who with "Revolver Rani" has somewhat tried to revive the era of "Fearless Nadia" and "Huntervaali". And to play this dictatorial role he has roped in none other than very versatile, Kangna who in the recent past literally left every one speechless by her Plain Jane act in recently released "Queen". 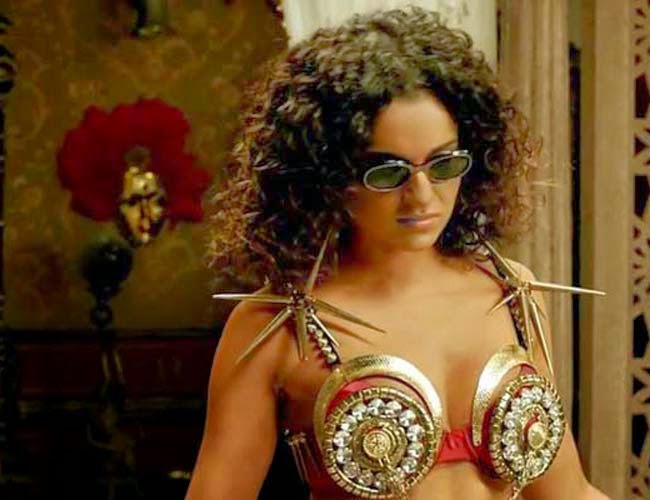 And from there begins a war of domination between the two anti-factions for whom exchange of bullets, and hooliganism are just like the part and parcel of their daily life. But in the mean time story takes another twist where, Alka meets struggling Bollywood actor Rohan Kapoor (Vir Das), who subsequently turns into her toy-boy of a sort, and that's because she commits to produce a film for him.


With frames rolling ahead, unaware of the conspiracies her opponents are hatching against her, Alka becomes pregnant with Rohan's child and fall in love with her newfound-role of would be mother and decides to leave her Bandit life and settle in Benice (Venice) with Rohan. So does she succeeds in her aim, or is the destiny which succeeds in making her a pawn of circumstances. To know watch "Revolver Rani". 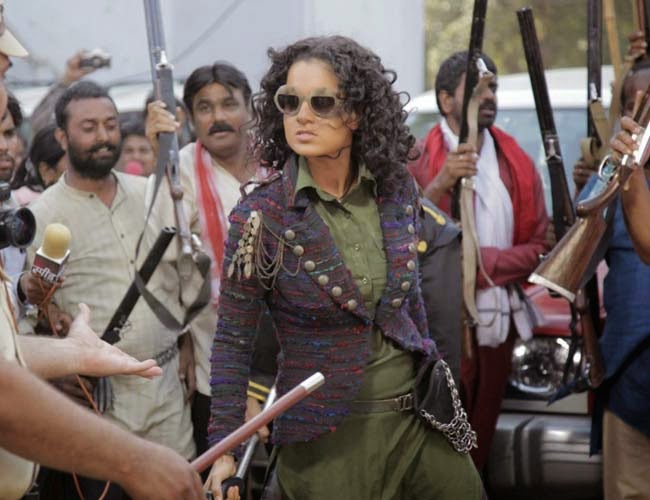 Undoubtedly this is not for the first time that we have become a witness to the regional-hooliganism embedded in the soil of rustic background. And this fact hold true because in the recent past we have had a good dose of the same in the form of Anurag Kashyap's "Gangs of Wasseypur I and II" and Dhulia's "Paan Singh Tomar" and "Bullet Raja". But this time with a women-centric cine idea at its core, Revolver Rani's story writer and director, Sai Kabir as tried to present us with a tasted ale, but with a thoroughly diverse tinge.

And in order to authenticate his this debut cine endeavour he has thoroughly tried to blend the flavours like rustic milieu, Kill Bill styled action, a pinch of romance, revenge and war of domination. But unfortunately despite the presence of so many fragrant condiments storyline of "Revolver Rani" looks more of like an aimless cine-rover, thoroughly oblivious about its final destination. Certainly the story-line may please some of you in parts, that too only if you have got some understanding of dark comedy, but on the whole it's just like a lost rambler unaware of its path.


First half looks agreeable initially, but as the time passes-by entire theme of "Revolver Rani" takes a plunge to never return to the surface again. Although in the post interval part, with just a few sequences your funny bones get onto job, but even that phase vanishes within no time. So on the whole while penning down the plot of "Revolver Rani", Sai Kabir picked something from every shelf in front of him, but completely failed in dextrously assembling them to obtain the propitious outcomes. Dialogues, as far as scribing part is concerned are just OK, but could have been better if the dialectical lingo would have been worked upon more. 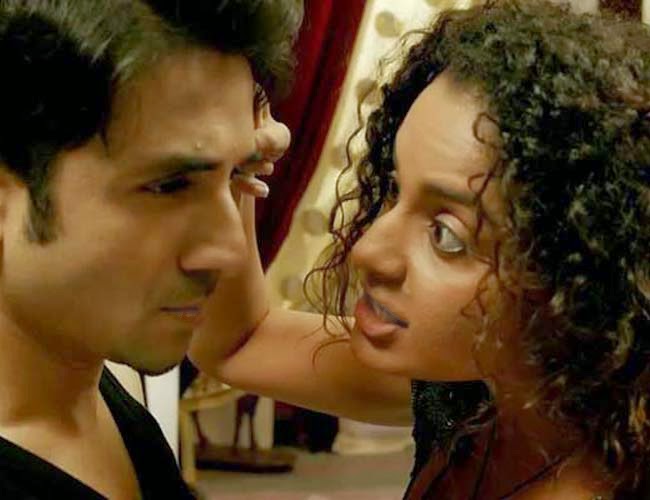 As far as screenplay is concerned, then just like the storyline even that looks like a thoughtless assembling of the raw sequences, despite the presence of an engrossing story idea in hand. With flow of narration constantly lacking the uniformity required to improvise the impact of onscreen proceedings, even screenplay positively contributes to the annihilation taking place on the silver screen. Even in the editing department it's the shabby crafting of, Aarti Bajaj, who has kept everything from a pin to a pole intact despite its being inessential, depletes the gripping potency of the movie.

Despite the presence of a few unusual carols like "Lade Re Bhaiya", "Zardozi" and "Chanda Ki Katori" music of, Sanjeev Srivastava is somewhat different, but not worth a recall.

After playing that memorable Plain Jane character of Rani in "Queen", Kangana is again at her performing best, where she not only plays the character of bandit, Alka Singh with spellbinding conviction but also dons the attitude of a wild cat yet soft at heart kind of woman with aplomb. 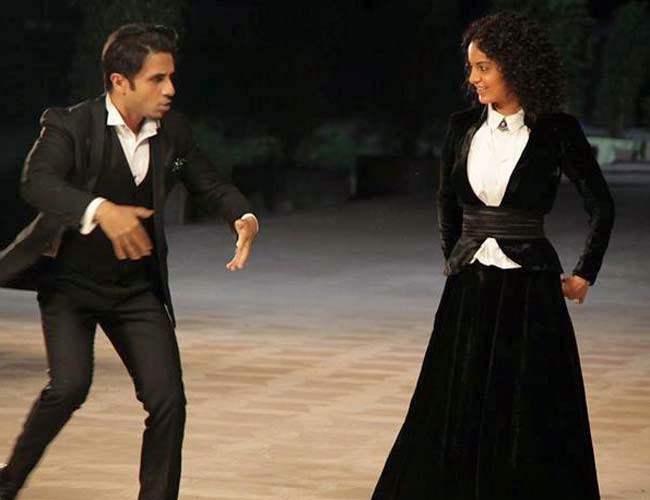 As far as Vir is concerned, then he would have proved his potential in the past, but here in "Revolver Rani" he looks like a misfit and constantly struggles to slip under the skin of his character. Piyush Mishra as think-tank maternal uncle of, Alka Singh is as usual outstanding. Zakir Hussain along with Kumud Mishra, Pankaj Saraswat is just OK. But the lady who leaves her mark every time she appears on the screen is, Payal Parihar as news reader.

To sum up, despite having a somewhat gripping story idea in hands, Sai Kabir completely fails in coming up with an engrossing cine offering, thanks to the disastrous execution. And it's this clumsy handling of such a relatively impressive premise, which makes you feel that "Revolver Rani" only has a revolver and no ammunition to entertain those sitting in the viewer's loggia. So despite the marvellous performance of Kangna, I am going ahead with two out of five stars for this shabbily executed cine affair.