Churning the "slice of life" genre of movie making is not something new in Bollywood and it's been time and again when we have seen our Industryvalas putting in their stirring apparatus in the genre to get something desirable out of it. Be it about painting something pertaining to "love in the time of recession" , "life in metros", "sperm donation" or something as sensitive as "inter- caste marriage", our Bollywooders at the power of their connoisseur vision always manage to come with a modern day cine idea belonging to the cine-ilk of "slice of life". 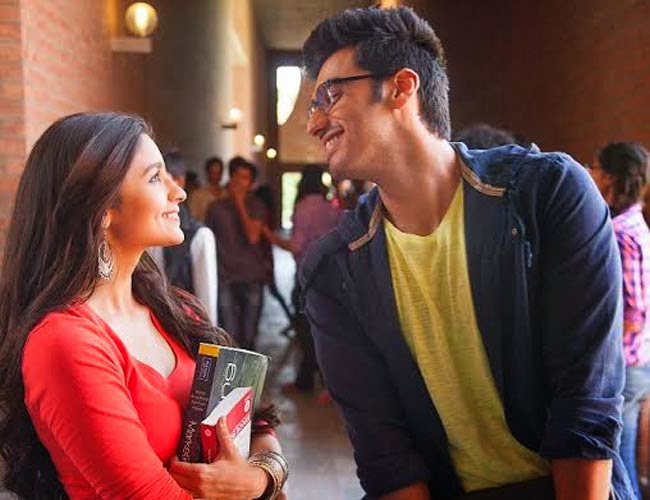 And this time its cross cultural or rather inter-regional, inter-caste marriage which has allured Sajid Nadiadwala & K.Jo, who have come up with a cine offering based on the bestselling novel "2 States" of the ace novelist, Chetan Bhagat, with the theme of cross- culture or inter-caste marriage being at the centre of the business.

Well this is not for the first time that any of the Bollywooders have tried to experiment with this genre. If we turn back the leaves of Indian cine history then Bollywood's association with somewhat similar story-line dates back to 80's, when Kamal Haassan and Rati Agnihotri starrer 'Ek Duje Ke Liye", where a South Indian lad falls for a North Indian girl, made it to cine world. But after seeing, `2 States", it looks like with a shift in the era, even the concept of inter-caste love and marriage has taken an altogether different shape. On one hand where "Ek Duje Ke Liye" banked heavily upon the plight and agony of lovers, its 21st century version i.e. "2 States" not only differs from the spirit of its predecessor, but also introduces viewers to a new perspective pertaining to inter-caste or cross cultural love affair and marriage. 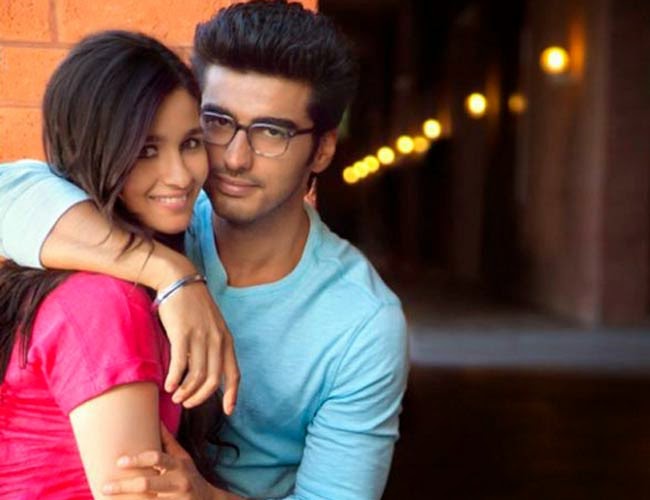 Based upon the bestselling novel of Chetan Bhagat, `2 States", truly re-introduces us to a usually seen reality of North-south divide, where for North Indians, every South Indian is a "MADRASI" and for every South Indian, North Indians are nothing more than the boastful exhibitionists. Besides this what "2 States" communicates with conviction is that, in Indian culture marriage is a ceremony which takes place between families & not just between a boy and a girl, therefore making certain facts mandatory. Firstly girl's family must have a liking for boy, secondly boy's family must have liking for girl and thirdly, but most importantly girl's family must have a liking for boy's family and vice-versa. And after that if any quota of liking and love remains in hand, only then the love birds should proceed ahead with their foremost desire of tying the nuptial knot.

Anyhow unfurling the premise of the movie, `2 States" primarily pertains to the twisty- twirly love jaunt of cupid bitten lovers, Krish Malhotra ( Arjun Kapoor) and Ananya Swaminathan who after having a rendezvous at IIM-Ahemdabad fall in love with each other. With frames rolling ahead the duo decides to tie the nuptial knot, but the only hitch in this noble mission of theirs are their respective family backgrounds, where Krish is from North Indian Punjabi family, whereas Ananya belongs to a Tamil Brahamin community. And what follows next is the cultural clash between their parents. So what happens subsequently, does Krish and Ananya succeed in convincing their sweetie rebels i.e. their parents and make their love triumph, or do they lose it to destiny, to know watch "2 States".


Because of "2 States" being a cine narration based on the best seller "2 States" an autobiographical eponymous account of Chetan Bhagat, there remains very less scope to gauge the enveloping appeal of the story-line. But yes one thing which stands-out as a fact is that, while dealing with a somewhat generic issue, Chetan has prudently succeeded in embossing a diverse range of socio-cultural & emotional variables, on the story to make it an assimilating reading or viewing experience. 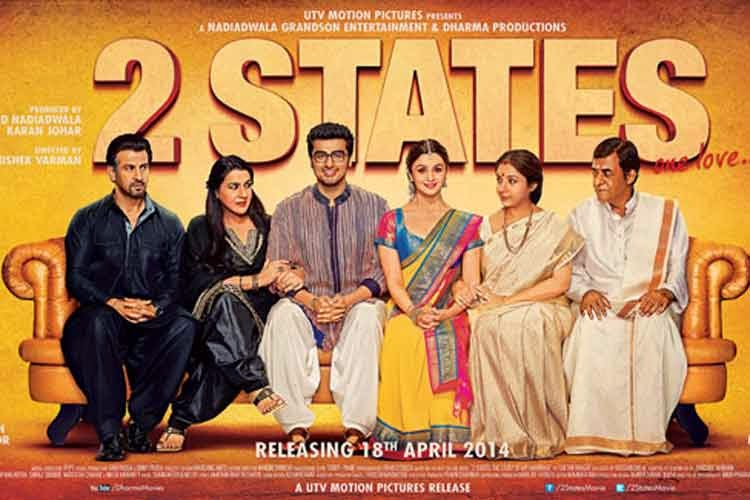 As far as mesmerizing captivating potency of "2 States" while its being on big screen is concerned, then for that perspective entire credit goes to movie's director and screenplay writer, Abhishek Varman, who has not only kept every minutest detail pertaining to cultural diversity, emotional expressiveness etc under tabs, but at the same time has adroitly managed to keep the spirit of Bhagat's best seller alive. If we talk about the shifts in the time periods, flow of narration, and even liaison and affinity of onscreen characters then even that packaging of "2 States" is so dauntless and neat, that you somewhere sub- consciously stats empathizing with the onscreen proceedings.

With his exemplary cinematographic adeptness, Binod Pradhan has captured milieu and every relevant detail associated with the narration with paramount excellence. By dexterous use of her editing skills, Namrata Rao further contributes to the win-win score of "2 States". Dialogues of, Hussain Dalal are again quite authentic and expressive, that too sans any obtruded inflation or pompousness.


With some adorable aural melodies very much in accordance with the spirit of the movie, music of Shankar Ehsaan Loy thoroughly illuminates the overall appeal of the movie.


As far as performance spectrum is concerned then decorated with some marvellous acting accomplishments of entire cast, "2 States" turns out to be a picture perfect visual delight too.


After donning the blanket of somewhat grey-shades in his past cine stints Arjun re- introduces viewers to an altogether different side of his acting ability, where he quite effortlessly slips in the robe of a charming yet decorous metro-hot guy. Even Alia seems to have matured now as an actress and besides that confident dialogue delivery, it's her far more polished emotional expressiveness which does wonders for her. 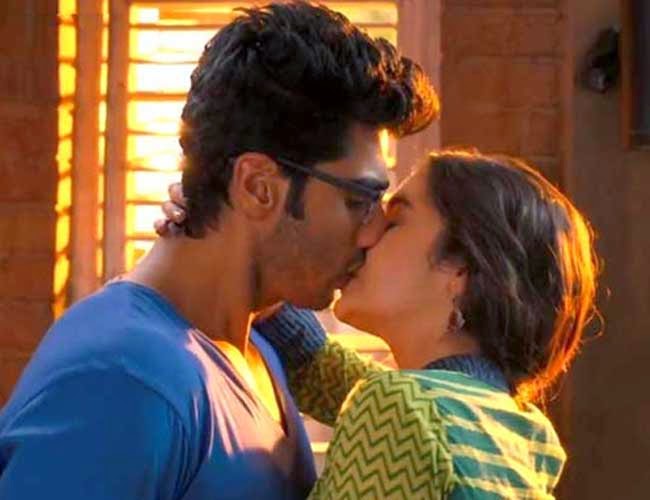 Supporting cast of the movie, comprising of a bunch of seasoned performers like Amrita Singh (who plays the character of a dominant Punjabi mother), Ronnit Roy, and Revati (who always manage to grab your attention by her performance as staunch yet stoic Tamilian) and Shiv Subramaniyam not only authenticates the onscreen proceedings, but also resolutely glorifies it.

To sum up, bedecked with colossal chemistry of Arjun and Alia, complemented by the story telling excellence of, Abhishek Varman and festooned with story-line of Chetan Bhagat's best seller, "2 States" is no less than a nectar for soul. And contrary to one of the dialogues of the movie stating that, ` the story need not to have a hero, rather story itself should be hero (Story Main Hero Ho Na Ho, Story Hero Honi Chahiye), I would like to specifically mention a fact, that undeniably story of "2 States" is a hero in itself and but at the same time everything pertaining to it is also heroic. Therefore on the basis of these findings I am going with 3 out of 5 stars for this congenial cine affair.